There is no true way to know exactly how prices will change once all the embedded taxes in the current system are removed. Dr. Jorgenson calculated that currently, if a product costs $100, $22 of that is due to taxes upon the multiple producers involved in the creation of the product. The FairTax removes all of those taxes. It also removes all the withholding taxes that currently burden every paycheck (7.65% minimum from the employee, approximately 10.5% from the employer). Every business will handle this windfall differently: some will pay their employees the 7.65% and keep the 10.5% for themselves; others will lump their 10.5% into more employee pay to attract higher-skilled workers; and still others will pay their employees what their employees currently take home, trying to hold on to every dollar possible; and still others will fall in-between. So employee wages will vary greatly.
On the business side, some businesses will take their tax savings and cut their prices to grab a larger market share; others will keep their prices the same and try to pocket the additional earnings; and still others will settle in between these two extremes. What is known is this: the tax burden — and the burdensome reporting and submission requirements from the government — will go away with the FairTax, making it easier for businesses (especially small businesses) to start up and thrive.

Taking all of that into account, the net result will be, overall, a population with more money in their pockets at the end of the month, and products that are a little bit less expensive on the shelf. To what degree is unknown. When you take the middle range, however, it can be estimated that on average, employees will gain about half of their 18.35% payroll tax windfall, and businesses will drop their prices about half of their 22% tax windfall (at least until a competitor lowers prices!). Therefore, assuming these averages and the absence of any price competition between businesses (which is unlikely), the net gain in purchasing power would be about 20.2%. And, as a family of four would pay no taxes until they exceed the “poverty level” of spending, a family of four would have to spend in excess of $250,000 before they would pay a higher tax rate than the increase in their spending power. See the chart below.

Unfortunately we have all seen articles in which the authors spew twisted facts and incredible fallacies in an attempt to discredit the pending legislation, HR25 “The Fair Tax Act of 2013”. I am writing to set the record straight.

First, allow me to strike at their chief solution to our current tax mess. They propose a 10% flat tax with no entitlements or special benefits. Yet basic economics tells us that a 10% flat tax on personal income will only raise $1.34 trillion (total personal income is $13.4 trillion annually as of 2012, the last year fully available). With current US spending at $3.6 trillion that same year, their chief solution is a program that will create a yearly deficit of $2.3 trillion or more (greatly in excess of the $1.1 trillion deficit in 2012). To generate the same amount of income as the current system, any Flat Tax would have to be 19% from the first dollar earned to get close. (This would disproportionately hurt the lower and middle classes the most.) Additionally, a Flat Tax is easily turned back into a graduated income tax with special interest interference.
These issues are among the issues that led me to personally seek a better tax solution for our society, which after much searching and research led me to the FairTax. Now let me address several fallacious claims regarding the FairTax…

Would anyone call their tax refund a huge “entitlement program”? I don’t think so. Yet some persist in calling the FairTax “prebate” (which I contend is more accurately called a “prefund”), a “$600 billion entitlement”. The “prebate” simply serves as an advance tax refund; in other words, you get it before you pay your taxes, instead of after. Additionally, in contrast with our current system, every legal resident gets a “prebate” based upon their family size, notincome, and the “prebate” does not vary based upon income, so the lower and middle classes benefit more than those with higher incomes.
Important point: this “prebate” serves a vital purpose… removing the tax burden on all residents up to the government-defined “poverty level” of spending.
Example: The government has defined that it takes approximately $31,000 yearly for a two-adult family of four to afford basic housing, utilities, transportation, food and clothing; the “prebate” pays back that family – monthly, in advance – the taxes they will pay on $31,000 of annual spending ($31k x .23, then divide by 12 months= $595 per month). The prebate varies based upon the number of adults and children in the household, so the net result is that no legal resident should pay taxes until they spend more than the poverty level of spending. This is a huge benefit to the poor and middle class, who currently pay taxes on their first dollar of spending — and on every dollar thereafter.

These same individuals also misrepresent the “prebate” as “to merely repay the poor for any Fair Tax they pay”. That is not the purpose of the “prebate”; if it were, it would require different payments to every person, and intense, intrusive tracking of people’s spending habits! No, the “prebate” is intended as an advance reimbursement of spending for every legal resident up to the poverty level of spending. The “prebate” makes the FairTax progressive, as people who earn less will spend less, and therefore have more of their spending offset by the “prebate”; these lower-earners will therefore pay less in taxes than people who earn more and spend more.

An issue that deserves our attention has recently surfaced in the debates between the Republican Party candidates who hope to unseat Sen. Mark Begich in the Nov. 4 general election. That issue is the 100-year-old income tax system which can only be described as a ridiculous, complex and intrusive mess. It is burdensome to tax filer, destructive to the economy and custom designed to invite political motivated abuse and corruption. It is broken beyond repair and the time has come to correct a 100-year-old mistake.
END_OF_DOCUMENT_TOKEN_TO_BE_REPLACED

No, the IRS cannot be fixed — it must be abolished and replaced with the Fair Tax

A Washington Examiner article asks “Can the IRS be fixed, or should it just be abolished?” The answer is clear to anybody who has followed the IRS scandal or filed a federal tax return.

Washington’s individual income tax and its enforcement agency, the IRS, cannot be fixed, repaired, reformed or rehabilitated. They are a cancer eating away at this nation, her taxpayers and our economic engine.

Congress created the income tax in 1913, and for 100 years the IRS has operated exactly as intended, as an agent of control with total impunity, even down to the political targeting of individuals and groups.
END_OF_DOCUMENT_TOKEN_TO_BE_REPLACED 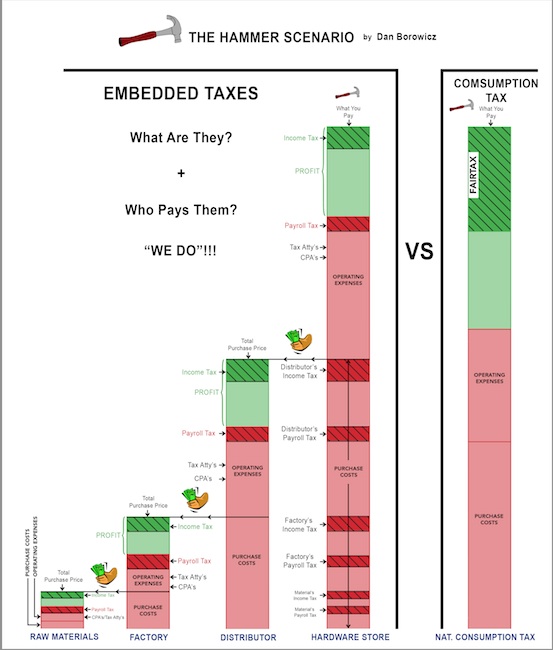 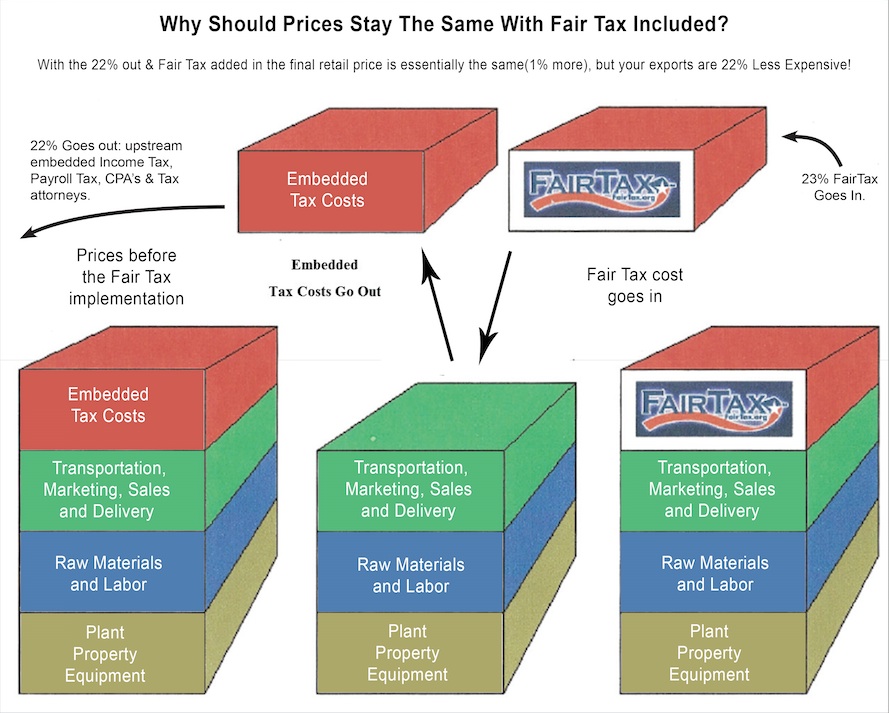